Visiting Uganda On A Moderate Budget

Welcome to my blog about my recent (2018) trip to Uganda on a moderate budget. The motivation for this page, is to share some of the wonderful sights, experiences and learnings I collected on our 3 weeks trip, and hopefully encourage others to visit this exciting country located in east central Africa.

“With a tapestry of landscapes, excellent wildlife watching and welcoming locals, Uganda packs a lot into one small country. It's home to Africa's tallest mountain range (the Rwenzoris), the source of the Nile, the world's longest river and the continent's largest lake. Rafting the Nile offers a world-class adrenaline adventure, but the country's most iconic experience is tracking mountain gorillas in their misty habitat. And if you view the Big Five, you'll see that nature – diverse and resplendent – looms large here.”
Lonely Planet - Uganda 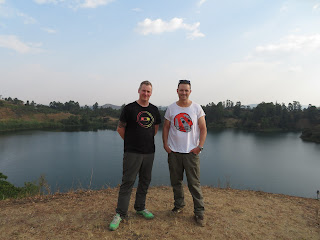 It had been on my bucket list for several years, but found it difficult to decide exactly where and when to go. My top priorities was wildlife, meeting locals and doing some sports fishing in the fabled freshwater lakes and rivers of central Africa. I finally chose Uganda, it seemed like the perfect place for adventure - yet being stable and safe… And what a great decision it turned out to be.

I went with my trusted travel partner Thomas - we’ve been all over the world together, always with our fishing rods in the backpack.

We’d planned to rent a car at one of the international rental companies in the airport and then cover most of the country during our 3 weeks vacation.

By chance we met a friendly woman on the plane flying in to Entebbe. She offered us a lift to Kampala, where we could rent a car from a local rental shop, way cheaper than in the airport. After some asking around, we realized that we could actually rent a car including driver for around the same price as we’d expected to pay in the airport. It turned out to be a great decision.


The traffic in the major cities is pretty crazy + it’s left-hand traffic + some roads in the nature parks are so rough, that it takes some skills to drive there.  Not that it’s impossible to self-drive, actually most roads outside the cities are decent, and don’t carry that much traffic. But it surely would have taken a toll on us, and spoiled much of the sightseeing if we’d driven ourselves. Also we went places we’d never found on our own, and saved money on accommodation, food, and nature parks entrances all thanks to our local knowledgeable driver.

Usually when we travel, we get around by public transportation. But on this trip, since we had our own car and driver, we didn’t go by bus or mini van (taxi) at all. The easiest way to get around inside cities are by Boda boda’s (Motorcycle taxi). The price is low, usually a 2-3 USD for 10 min. ride. And it can easily carry two full grown european tourists beside the driver. The drivers are usually very aware of potholes and speed bumps, but still you should hold on tight.

Uganda is a safe place to travel. At no point did we experience any hostility, theft or insecure situations. People are generally accommodating or at ”worst” indifferent with the presence of tourists. I believe the biggest thread to your health, is the traffic in the major cities - the boda boda’s (motorcycle taxis) won’t hesitate to drive in the wrong lane, or on the sidewalk to avoid traffic jam.

The first park we visited was the Mburo national park. The park is located some 100km west of Masaka. We’d been warned, that it is a low-key park, with nothing much to offer, compared to the larger ones, but we found it to be a great experience! First of all it seemed that most other tourists had followed the advice and bypassed this park. We had a gamedrive all afternoon, only meeting one other car. It was so peaceful and there where an abundance of animals. We saw leopards, giraffes, zebras, wild boar, monkies, elands and many more.

Entrance to national parks are generally $40 USD per 24 hours. You pay at the entrance gate, make sure to keep the receipt as you must show it upon leaving.

Although the all-pervading Tilapia has replaced many of the endemic species, it’s still possible to discover a variety of species when fishing the lakes and rivers of Uganda.

To fish in the lake, a license is needed. It’s $15 for a day and can be bought in the office inside the park. If you want to explore the shores of the lake you’ll need escort by a ranger. As we didn’t want that, we were only allowed to fish from the pier near the center of the park and at a shore some 200 meters away. We bought some worms from an employee at the restaurant and started fishing with spinners, wobblers and worms.

We tried fishing with bread, spinners, wobblers but only the worms seemed to get the fish's attention. Quickly caught a bunch of small tilapia, cichlids and perch-like fish. Also a couple of catfish around 1 kg. Around noon we where lucky to catch tilapia big enough to eat, and the cook in the nearby restaurant cooked it to perfection. 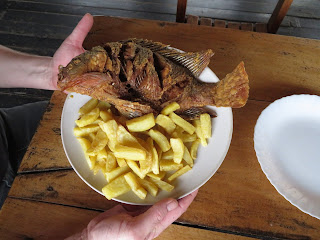 Fishing in Murchison Falls (Crossing the Nile with Stanley)

Around Murchison falls you'll find yourself totally immersed in the finest African landscapes. You might even have an entire river to yourself.


Entered the park at sunrise. Paid 24 hour access to the park at $40 per person and something similar for the car. On top of that, we paid $50 per person for one day fishing license and in addition we had to pay $205 per. person for the boat and captain (including food).


The payment turned out to be a little difficult because we asked to pay with credit card. The only place with stable mobile connection was on the middle of the river. So we went in a boat, along with the office lady and card reader on the river, where the transaction could be completed.

Then off with our captain: Stanley. No one else was on the river that day!

First we tried to catch baitfish. It proved difficult, but we did manage to catch a couple of small tilapia. Fortunately our captain had brought 3-4 fish from the day before, that we could use. The bait fish was mounted on large single hooks and we threw them in and waited. It did not take many minutes before line was being dragged off my reel, could it really be a Nile Perch so 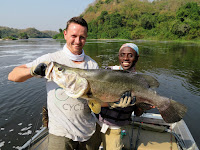 soon? I waited about half a minute, then gave a firm tug and immediately felt fish on the other end of the line. It was really heavy also due to the strong current, I struggled and I pulled - and after 5-10 minutes fight I finally got it near the boat where it jumped out of the water and revealed that it was a good sized nile perch.

Stanley picked up a pair of gloves and dragged the beast into the boat. We didn’t weigh any the fish (probably to avoid damaging them) but by length, circumference and a table, Stanley determined it's weight at about 13 kg. A baby! The year before a 82 kg specimen was caught in the exact same spot, and they grow as big as 100 kg. Nevertheless it was big enough for us! Before long we caught one more at about 6 kg.

We sailed the boat near the falls and started fishing from shore. 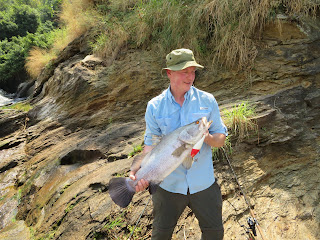 The waterfall is very impressive. The water is pushed down through a narrow gorge and thrown from one rock side to the other, after which it ends in a large pool where the strong current swirls with foam on top. Here we started fishing with wobblers and landed 3 nile perches all between 5-8 kg.

Finished the day fishing with a few dead fish we had left. Once again we had luck, and caught a 13 kg. catfish that gave an intense battle.

Our budget was approx. $30 per night for a double room. And we usually had no problem finding suitable accommodation. Around and inside the national parks we sometimes had to pay a little more.

Feel free to contact me for further information. If you desire, I can provide contact with the driver we used.

Check out this gallery for more of photos from the trip.